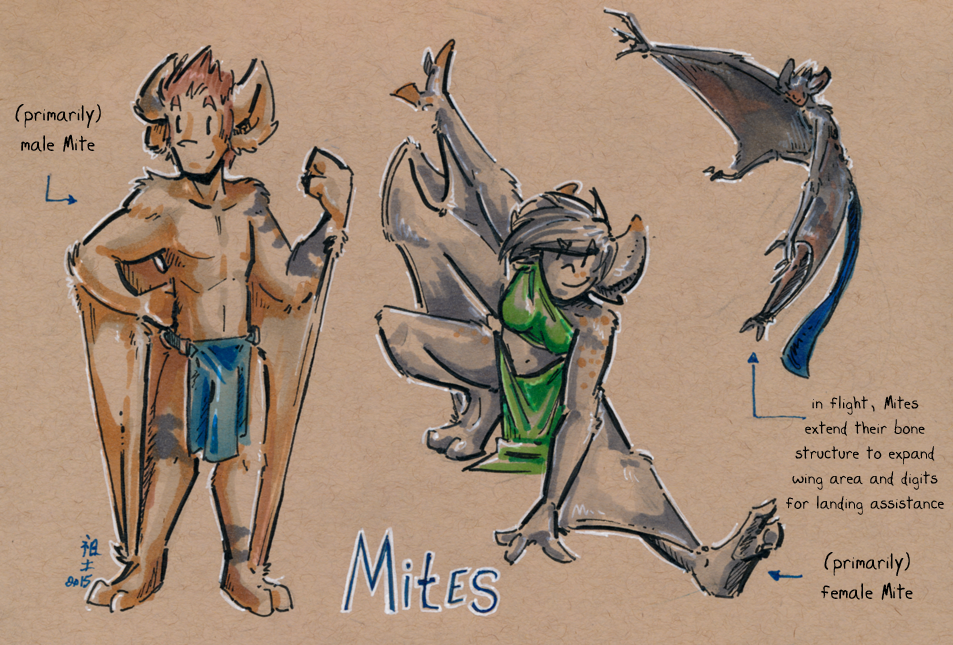 Biology & Diet
Mites are easily recognized as hominid mammals with furred bodies and large ears. They have two digits on their feet and three on their hands, as well as a large flight membrane stretching from wrist to ankle for use in gliding. Mite noses are typically upturned, with a "pushed in" look.

Unlike their Utini cousins, Mites are not true flyers, but instead glide on the thermals surrounding their cities. Their bone structure is slightly heavier than the Utini, and to compensate for this Mites have evolved a secondary muscular and skeletal system in their limbs and digits which allows them to stretch their arms, legs and gliding membranes to form a wider surface. This is achieved by an additional bone which is normally kept tucked against the humerus, femur or phalanges moving forward to fit between it and the adjoining bone structure. Elongating the fingers and toes aid the Mites in landing.

The chromosomes which determine Mite fur colour are linked to those that determine the secretion of sex hormones in a Mite brain. Generally, Mites are found in shades of grey and brown.

Mites are omnivores, depending mostly on free range herd beasts to provide the meat in their diets.

Sexual Dimorphism & Reproduction
Mite fur colour and sex hormone secretion in the Mite brain are linked. The more grey to a Mite's fur colour, the more estrogen will be found. Similarly, the more brown found in a Mite's coat, the more testosterone their brain will contain.

This does not mean that Mites are found in only two sexes. Coats are often found with mottlings of both colours, and, depending on the Mite, this may influence what reproductive organs they have been born with.

Compatible and functioning reproductive organs can result in an offspring, usually only one per birth. Offspring are carried for approximately eight months of Earth time and are born live.

Rarely, Mites are born with coat colours which do not conform to grey or brown. While there is nothing culturally significant about these particular Mites, their sex -and gender- can vary or even fluctuate depending on the individual.

Mites wishing to present as a binary sex with a severely mottled or abnormal fur colour will often dye portions of their body to a more typical tone of brown or grey, but leaving fur natural is also equally common and acceptable. Mite offspring are raised by either one or both parents, and develop on a neurological level on par with Human children.

Language & Culture
The Mite language shares a root with the language of the Utini, though both cultures dislike admitting to the fact. Mite language is more heavily accented than Utini, and makes use of a more complex set of grammatical rules. When written, it resembles a series of dots, boxes and lines.

Mite culture prior to their ecosystem collapse was considered to be on par with that of Earth. Dwelling in complex cities usually built into the mountain ranges near active volcanoes, Mites relish height and open spaces. Their structures contain many spires with numerous flat platforms overhanging the ground below for use of in gliding.

One thing Mite culture is known for is its own brand of exceptionally catchy rock music. In spite of having only three digits, Mites have developed a signature sound that is beloved by alien music fans across the galaxy. They are fond of blending string, percussion and vocals. Their ability to elongate limbs has lead to the invention of some truly unique drum rigs. It was at one time common for a band who gained popularity within Mite cities to be able to travel to worlds outside of SRYY 45-B on talent alone.

Mites rarely spend time dwelling in the lowlands, and are almost exclusively found in mountains. It is unknown if this is because they prefer the heights or if they were at one point pushed there by the Utini during a resource conflict.

Like the Utini, Mites do not like their cousins. While it is almost unheard of for Mites to actively seek out Utini settlements or heckle the species, they none the less seem to have a generations-old animosity towards the sibling species.

Religion & Rulerism
The most notable thing for Mite religion is a worship of dreams. Mites feel that sleep is profoundly important to the spirituality of a person, and to their ability to develop solutions to problems. This religion is colloquially known as Sleep Talk.

During Sleep Talk, a Mite will enter a deep, nearly unwakeable sleep state. Scans of the Mite brain during this time show an extreme active state, unlike any other species' REM previously recorded. Although it is not fully understood how, Mites in a state of Sleep Talk have often awoken with knowledge they could not have previously acquired otherwise.

It is suspected that Sleep Talk allows a Mite to access a collective subconscious, a sort of limited species-wide sense of telepathy. It is ill advised for young Mites to enter this state, at least not until their guardians teach them tricks of meditation beforehand. In this way, a Mite in the dream world may be able to defend themselves against the pitfalls of the subconscious.

Because of the scientific validation of the Mite religion, many species do not believe that it is fair to call Sleep Talk religious.

Mites themselves are non-receptive to Rulerism. The idea of a single entity in charge of the dream scape does not seem to make sense to them, and so they reject it. They did not have any particularly notable conflicts with Rulerists over this.

Technology & Alien Cultures
Apart from their contributions to pop media with music, Mites have little they can claim unique ownership of. One thing they have developed has been extreme heat-resistant space ports, capable of withstanding complete submersion in magma. These spaceports have the ability to deploy a metallic alloy shell about themselves in the event of a nearby eruption in order to protect ships and citizens from danger.

Because of the quarantine of SRYY 45-B, Mites are now extremely rare in the galaxy. Those that can be found are often friendly, but the fatalistic way of those who live as if they have nothing left.