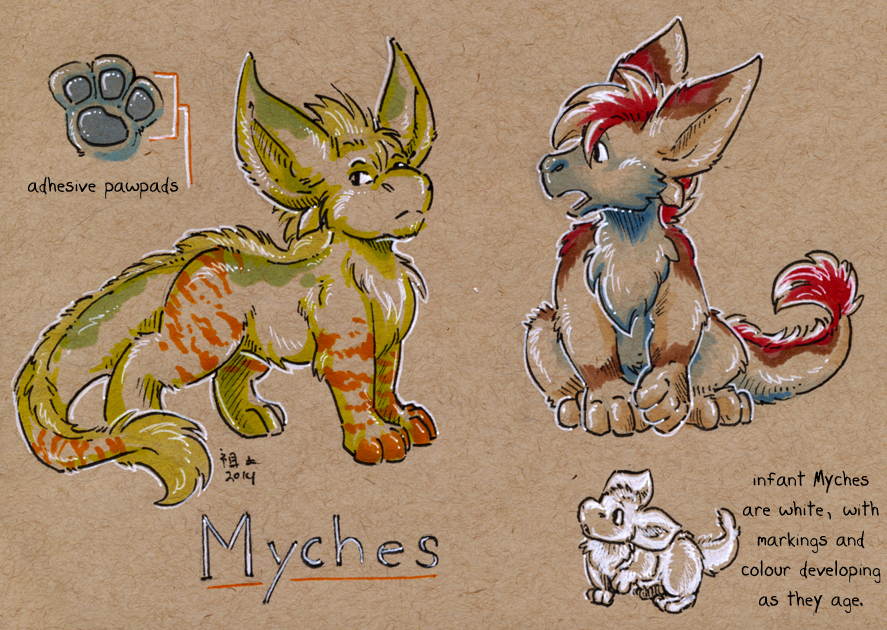 Biology & Diet
Myches are an oviparous race of highly intelligent mammo-reptilians. Their bodies are covered in thick, multi-coloured fur. A mane runs from the top of their heads to the end of their tails. With long ears and muzzles reminiscent of equines, they are easily identifiable.

It is unknown what evolutionary advantage the brightly coloured coat offers Myches, as their homeworld has never been located or documented. As such, much about Myche physiology is shrouded in mystery.

Myches are quadruped, with three digits on each foot. Their front paws have a thumb-like digit, which assists them in manipulation of objects. Additionally, Myches have developed "sticky" pawpads. These pads do not actually secrete any adhesive, but are instead ridged in such a way that they behave similarly to the feet of Earth geckos. These pawpads enable Myches to not only lift and hold small objects their wide digits would otherwise be unable to, but also allows for young Myches to climb on vertical surfaces.

Myche mouths contain a row of flat grazer teeth, as well as blunted canines. It is suspected that their ancestors may have been omnivorous, as Myches themselves can digest some meats without trouble, but there is little other proof owing to the fact that the Myche homeworld has yet to be identified.

Sexual Dimorphism & Reproduction
It is extremely difficult to sex a Myche, and this difficulty extends even to other Myches. There are no obvious external secondary differences, and as their reproduction is similar to that of Earth birds or reptiles, even genitalia are difficult to distinguish. It is common for Myches to approach the act of mating without knowing -or caring- the sex of their partner. Perhaps because of this, Myche reproduction is extremely casual and mated partners do not form familial bonds.

Myche language does not use gendered pronouns and Myches themselves have little concept of self-gendering. What is known is that some acts of mating result in offspring, and some don't. The details of why are still shrouded in cultural, medical and linguistic barriers.

Myche offspring hatch from eggs, which are laid in nests and then promptly abandoned by their parents. Nests consist of four to eight eggs, and are usually found in inconvenient locations such as the interior of ventilation ducts on space stations. Nests are constructed primarily out of the chest fur of adult Myches, providing both insulation and -theoretically- a sense of identity for the young when they hatch.

Myche young hatch after four months. During this period of time, the nest is completely without protection. Before Myches were considered of sentient status, it was common practice to destroy a Myche nest if found - or to sell its eggs, for the offspring to be raised as beasts of burden. Young Myches were once considered a nuisance, and it is not surprising. When the nest hatches, the small Myches begin to crawl on every surface and, because of their innate intelligence and curiosity, quickly begin dismantling anything they can.

It is now understood that this is because Myches are considered recipients of genetic memory. Young Myches are born not only with an innate knowledge of mechanics and basic physics, but with a fluency in the Myche language as well. Young Myches pick their own names, typically based on personal interests. They do not learn their parents, and do not seem bothered by this lack of knowledge.

Infant Myches are born with pure white fur, and no markings. As they age, their markings and fur colours begin to develop and continue to darken as they grow older. Although rare, some Myches remain white-coated into adulthood. This genetic abnormality has yet to be explained, but culturally, Myches treat these individuals as children well into their adult years.

Identity within a group of nest siblings is strong, as this is likely the only family they will ever know. Siblings are often found working or living together.

Language & Culture
The most notable thing about Myche language is its complete lack of personal or impersonal pronouns. Myches do not refer to individuals with words such as "he" "she" "they" or "me". Instead, they use proper nouns at all times. A Myche will refer to themselves by their own name, and nothing else.

When speaking to others, Myches will sometimes use other identifying proper nouns - such as those for occupations, species, or names. Though it is rare, some Myches have grasped the concept of pronouns and will use them with others, though this is purely for the peace of mind of those around them. Generally, the only accepted pronoun use by a Myche is one which refers to a collective group. A plural "you" or "they" is fine - an individual "you" or "they" is unacceptable.

Myche language was initially thought to be just a series of animalistic noises - yowls, howls and chirps. It was not until a xenolinguist began to document the patterns of his pet Myche's vocalizations that it was realized Myches were more than simply animals. Until this point, it was thought attempts by Myches to mimic other languages were simply exquisite mimicry.

This leads us to the unfortunate history of Myche culture.

There is no documented homeworld for Myches, and therefore there is no anthropological evidence of their development as a species. When Myches first appeared - mysteriously, hatching in the vents of an early Chuian space station- it was assumed that they were some kind of alien space pest. For decades, Myches were killed, enslaved, skinned for their pelts and sold as pets. When the realization of their intelligence was made, immediate protection laws were put into place and reparations made - but the Myches have not forgot the suffering they endured.

This has lead to an all-consuming quest which each individual Myche is engaged in on a personal level. The quest is to locate the Myche homeworld, through whatever means necessary.

Religion & Rulerism
Myches do not have any religion, though some feel that their devotion to the location of their homeworld is almost religious in nature.

There is no strong opposition or support of Rulerism by Myches. Some may join it and some may oppose it, but the quest for the Myche homeworld takes precedence over any other allegiances and Myches are prone to switching sides without notice if they believe another group is coming closer to a breakthrough in their quest.

Technology & Alien cultures
Myches are extremely gifted with technology. It is through their combined work with the Chuians that the jump gates were developed, and inter-stellar travel made accessible to the masses. How exactly they did this remains a mystery, as both Myches and Chuians are mum on the subject.

Additional Myche technological breakthroughs include artificial intelligences, durable solar sails, many xenobiological medical breakthroughs and, of course, Myche-net. Myche-net, now a multi-planetary internet database with continuous realtime data acquisition, began as a project in which self-automated scanners would process the genetics of every individual to pass through them, searching for any genetic patterns which might be similar to the DNA of Myches themselves. It was hoped that using this technology, a common ancestor or cousin might be discovered. This has yet to be successful.

Myches seem to hold little animosity towards the races who once enslaved them, though they do not hesitate to remind individuals who seem to selectively "forget" the past. As previously stated, Myches will ally themselves with anyone they feel can assist them in their all-consuming quest...and just as easily abandon allegiances when a better lead comes along.

Most species are understanding of this, and willing to accept the help of a Myche when they can get it.

SPOILER ALERT: if you'd like to read more about the Myche quest for their homeworld, click HERE.