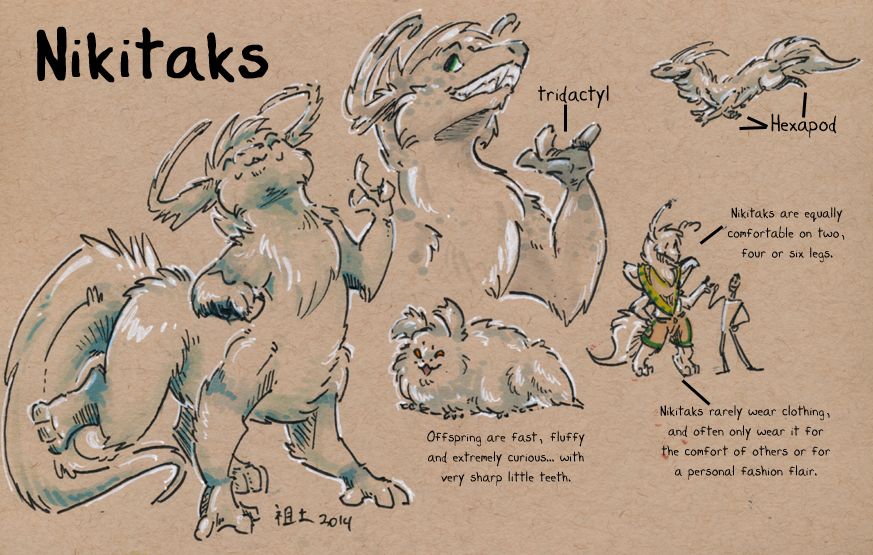 Biology and Diet
Nikitaks are traditional mammals. Their bodies are covered in a very dense, thick fur coat of white fur which enables them to blend in with their snowy habitat. Their long, six-limbed bodies are extremely flexible with serpentine core strength, allowing them to move with comfort and ease on either two, four, or six legs. Nikitaks lack a traditional ear, and instead experience sound vibrations by use of their antenna, which are covered in fine sensory furs. This lack of a true ear has resulted in a unique and identifiable accent when Nikitaks attempt to speak Uni.

The middle set of Nikitak limbs has a thumb and can function fully as a second set of hands. Each hand contains three thin, strong retractable claws ideal for piercing ice or the bark of trees. While these claws are not particularly sharp, they pose a hazard in a fight.

The long and narrow Nikitak muzzle is filled primarily with stunted carnivore teeth, which betray their diet as meat-heavy omnivores. While their ancestors may have been primarily carnivores, the modern Nikitak's digestive system can handle a wide assortment of consumables - including roughage and processed meals.

Sexual Dimorphism and Reproduction
There is little in the way of secondary sex characteristics for Nikitaks, and it is notoriously difficult to tell them apart due to their thick fur coats hiding anything obvious. As a species, they follow closely in step with Earth mammals in terms of the configuration of their reproductive organs.

Nikitak courtship is typical to an advanced mammalian race, including sharing activities and attempting to make the other member of the pair happy with gifts or attention. Although it is not entirely uncommon to find polyamorous Nikitak groups, most family groups are headed by a monogamous parental couple.

A pregnant Nikitak will carry the unborn for about 12 months before giving birth to one child at a time. The children are extremely small and covered in a very fluffy, downy coat. They usually ride in the fur on their parents, clinging tightly for the first few weeks of their life until their eyes open and they begin to move independently. Nikitak children begin to speak at about 3 human years of age. By the time they are 15, Nikitaks are approximately half-grown. A Nikitak is full-grown by the time they reach their mid thirties.

Because family plays such a strong part in Nikitak culture, offspring are often cared for by extended families and require almost constant attention and support in order to develop nominally.

Language and Culture
The Nikitak language, Nikatii, is a series of low and high vibratory sounds as well as a spoken series of syllables. Aliens who lack the deep chest cavity and flexible neck of the Nikitaks often require interpreters in order to speak Nikatii, although those with sensitive ears can often understand it quite well.

Written Nikatii consists of an elaborate alphabet of well over 10,000 individual characters. Some form basic sounds, while others identify specific common objects in Nikitak life. There are numerous dialects of Nikatii and her written form, but what is generally considered "common" Nikatii can be learned and replicated by any species capable of holding a brush.

Nikitak art forms include carvings of ice or wood, song, and especially dance. With their long bodies, extra limbs and mobility, Nikitaks are amazing dancers who have developed something which is akin to belly dancing. Many foreign species come to Nikiticha to learn the dancing technique, which Nikitaks use at almost every celebration - formal or informal.

Nikitaks commonly live in cities, which are often found in enormous hollowed chambers far below the ice and snow. More isolated Nikitak homes are often partially visible above the snow, and always domed to avoid being crushed by the weight of winter ice. To those few Nikitaks who dwell around the planet's equator, homes are built on floats which can bob up and down around the trees to which they are anchored, allowing the home to rise and fall with the seasonal freeze and thaw of the oceans.

Due to their peculiar form and thick coat, Nikitaks have not developed nor do they wear clothing for the most part. Exceptions to this may include a Nikitak working as a body guard wearing armor, or a mechanic wearing a tool belt and gloves to protect his hands. All Nikitaks wear some form of eye protection when in space, as the species is extremely susceptible to star-blindness. Other than that, fashion is only an amusement. Nikitaks find it especially amusing to wear the "wrong" clothing for an occasion just to see the reactions other aliens have.

Religion and Rulerism
Nikitak folk religion is one that believes in easily hundreds of deities, each promising its own path to enlightenment. As a rule, no single deity is the "correct" path, and all are viable ways of seeking your personal truth. All that is expected is that your faith in the pursuit of enlightenment on that deity's path is sincere.

An example of one such deity is the one which advocates the path of enlightenment via excess. A common patron saint of young Nikitaks and partiers alike, the countenance of this celestial being who took the form of a Nikitak is often found in frat houses or emblazoned on liquor bottles. He is also considered a patron of safe overindulgence, and so brothels often give prayer to this deity for the safety of their employees.

Nikitaks adopted Buddhism when they received interstellar transmissions from Earth approximately four hundred years in the path. The story of the Buddha seemed to echo many of the pre-existing beliefs of Nikitak folk religion and its pursuit of enlightenment, and so they accepted the Buddha as one of their many gods.

As a whole, Nikitaks were not entirely sold on Rulerism. Point in fact, they politely declined to accept the beliefs of Rulerism and very few Nikitaks have converted to it. The idea that one single Ruler in many guises is in control of something so individual as the experience of life and pursuit of enlightenment did not sit well with them. However, they remain on friendly terms with most Rulerist outposts.

Technology and Alien Relations
Most technology which originated from the Nikitak homeworld was not galactically ground breaking, but it was sufficient to secure the species a place in history as one of the first to master interplanetary travel and terraforming. Stunning engineers, Nikitaks display natural aptitude with most mechanical devices.

Inquisitive by nature, Nikitaks welcomed traders from offworld almost immediately and readily set out to join them in space. Politically, they are notoriously neutral, something which enrages other races from time to time. Nikitaks are very close with the tiny Chuians, the two races sustaining friendship for as long back as either had the ability to contact the other. Finding guest housing sized for a Chuian on Nikiticha is far more common than finding guest housing sized for a Human.